Hi there, welcome back into my personal weekly diary. Great that you’re here, and let me know what you think! In this diary I try to show what an eco-positive lifestyle looks like on a daily basis. I want to make the world a better place, by limiting my negative impact on this planet and maximizing the positive impact. The past week I celebrated a Dutch holiday called Sinterklaas, went out in Groningen and had a vegan fail after a long time. Want to read along?

Today it is the 5th of December and that means that in the Netherlands we celebrate Sinterklaas. It’s mostly a children’s holidays, focussed on mass consumption. Kids are taught that if they have been naughty they won’t get any gifts and if they have been good they will get a lot of gifts. I don’t really like the capitalist mindset about this holiday, but it is a moment to really get together with family and that’s why I decided to join my family to celebrate it. Over the past year there has also been a massive debate about the holiday since it is the tradition that people dress up in Blackface. I don’t agree with this at all and I try to speak out on social media about it. I think it should be adjusted. The discussing is currently most about whether this is racism or not. Racism is not an opinion and people tend to forget that. I don’t understand why Dutch people don’t want to adjust their holiday if they know it seriously offends people. Since when is tradition a reason to not consider other people’s feelings? Anyhow, I chose to attend the holiday partly, since we got together as a family (nobody dresses up btw) and gift each other gifts with a poem with each gift. There were a few things on my list (I keep a list on my phone for things I need to postpone the purchase and so see if I really need it and for when I visit a thrift shop) which I figured I needed and so I did attend. I asked for a secondhand warm cap for in winter, a new pair of tights from Swedish Stockings (I have written a blogpost on why I purchase tights there every time I need one) and some vegan food. All things I wanted and so I consider this holiday sustainable. I tried to buy sustainable gifts for others (my uncle asked for socks and I bought a fair trade pair made out of recycled material for example) and wrapped the gifts in used wrapping paper which I saved over the years from the gifts I have received. it was a lovely night! Before we started I went to the Albert Heijn (grocery store) really quick to buy some vegan hot chocolate. The brand I usually go for was out of stock and so I tried something new. I also bought some vegan whipped cream, which unfortunately contains palm oil but this time I could not resist it. 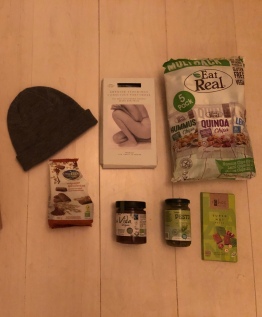 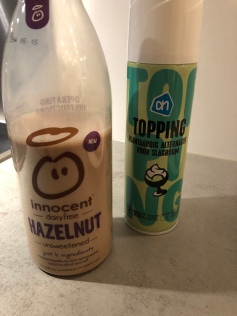 Today my vlog from last week came online as well: you can see it here.

Once back home in Enschede today I came to realize that one of my plants is sort of dying. I adopted them years ago, so they are secondhand. I put it in a bigger pot and hope it will recover a bit. I also made some vegan sushi again. The more I make it the easier it gets it seems. It is not zero waste since I don’t know where to buy the nori blades zero waste, but still vegan and therefore a good choice. 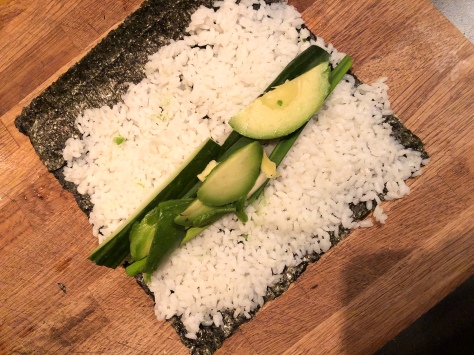 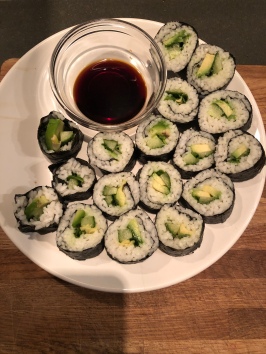 For dinner I had some oyster mushroom burgers. I got them for free from the Albert Heijn a few weeks ago. They unfortunately were not that good and I would not recommend them. After dinner a friend came to pick me up and we headed off to Groningen. A friend of us gave a housewarming since he just moved there. I brought my own reusable cup because you never know whether you need them at parties. After the party we went out and after that we had a midnight snack. I decided to get a sandwich with falafel, which would normally be vegan. But, before the falafel-man had asked me what sauce I wanted he had already put garlic-sauce on there, which is not vegan. I normally go for ketchup. He asked if he had to make a new sandwich since I said I wanted ketchup but I just took the sandwich because I thought it would have been a sin if he threw the sandwich away. A vegan fail, but there’s not much I could have done. The sandwich was wrapped in paper which was good though (no plastic).

We were home at about 5 am but I woke up at 9:30 again. My phone was empty and I didn’t know how the tv worked. So, there I sat in the living room while everybody slept. I am not good at doing nothing I noticed. I tried but after a while I wanted to go and try to go back to sleep. It did not work because just when I fell asleep, everybody else woke up. Time to go home. On the way we stopped a supermarket to get some drinks for on the way. I bought a vegan kombucha in glass, yes! Zero waste and vegan. Once home I made some vegan sushi, again. I just love that so much, it’s my favorite food ever. 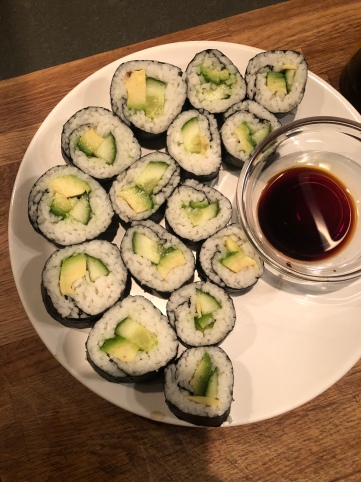 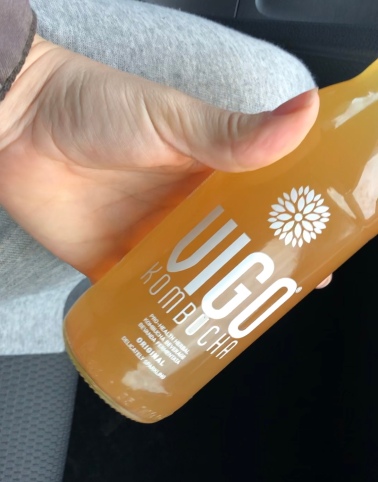 At lunch time I made a really random meal with some tofu and burgul. Both sort of needed to be finished and so I made them with some soy sauce and tomatoes. Simple meals can be quite good actually, this was good. I went to my boyfriend in Harderwijk and we played some Rummikub. I really enjoy played board games together. I’ve learned about myself that I like offline life quite a lot more than randomly watching tv. Reading books, playing board games, working out, sitting by the fire. And whenever I do watch tv (which is still a lot) it is selective, I choose what I want to watch and don’t just stare at the tv mindlessly. 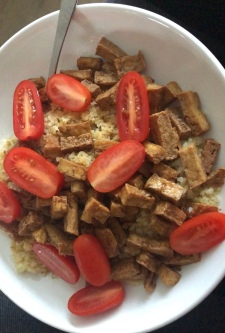 After the lecture at school, I came home and made myself some 2 Ingredient Vegan grilled ‘Cheese’ Sandwiches for myself. Such a good replacement for grilled cheese sandwiches. I used to love those, but I don’t eat cheese anymore now that I eat plant-based.

As I was free today I set no alarm. I wanted to see how much sleep I needed. I slept till 13:10! Some days I try not to set an alarm to see how my body behaves without an alarm. I think it is good to listen to your body every once in a while. I studied for a major part of the day and watched some good informative tv-shows like Zembla, MediaLogica and Tycho in de Psychiatrie (might be interesting if you’re Dutch). Around dinner time I received a package. I had ordered a refurbished Iphone charger, since mine had unfortunately broken (and so I will bring it to the recycling point soon). I don’t buy new since that’s not sustainable, but I could not really find much secondhand and I needed it quick and so refurbished was a good solution in this case. It was packed in an extremely oversized box with a lot of plastic, but there is nothing I could do about that. I always mention: as little packaging/plastic as possible please, whenever I buy something, but it does not always work. 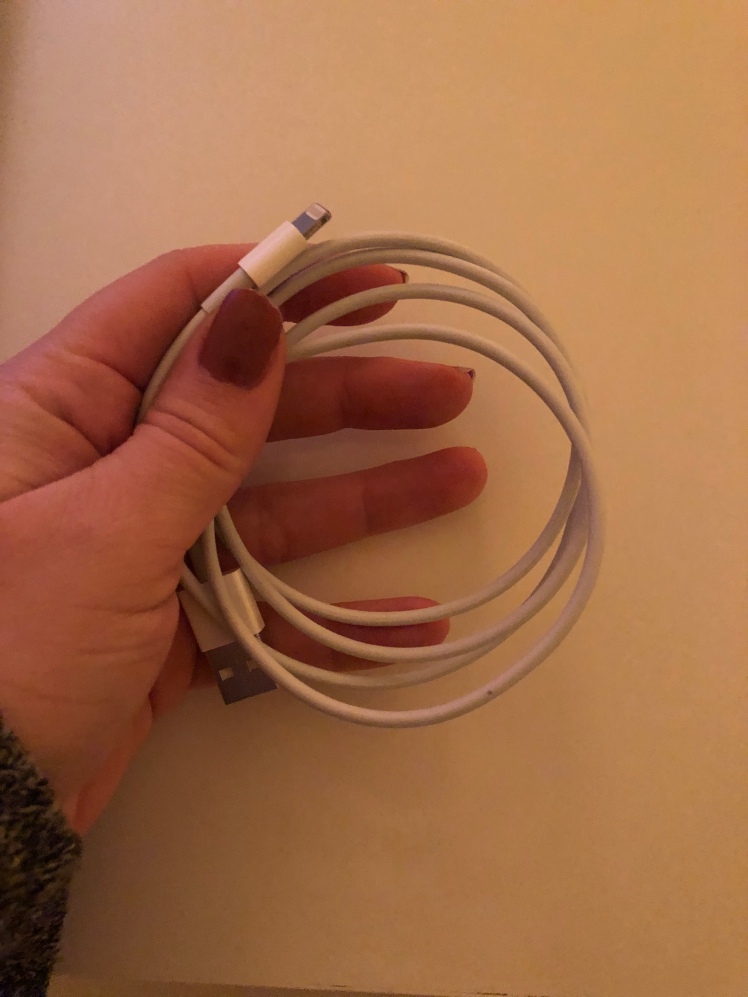