Since September I’ve been studying the premaster Environment and Resource Management. There, we’re studying world problems. Here on this blog I’ve talked about concrete actions to live more sustainable and compassionate. Eco-positive living, that’s what I call it. Yet, I’ve come to realize that I haven’t gone into the biggest issues just yet. From now on I want to do that, discussing a world problem on this blog. Today I’ll start with one problem: deforestation. What is it and what is so bad about?

I mention world problems all the time. Ocean acidification, deforestation, climate change and even more. But what do they mean? And why do we have them? What are the consequences? I’ve never really gone into them. I mention them, but who says all my readers know what I mean by them. Let’s say I mention: this causes the oceans to acidify. It sounds bad, but what’s really so bad about it? That’s why I want to write these articles. For myself too, to really get into a subject and know all the details. Adding a world problem to this list every once in awhile, I’ll really get an understanding of the full picture of world problems.

Now, whenever I say: ‘this is a cause of deforestation’, I guess everybody can imagine deforestation is a bad thing. If you’ve seen footage of deforestation your gut immediately tells you: this is bad. But what is so bad about it? What systems are affected by deforestation? And why do we want to avoid it? That’s what I want to sum up in a understandable way in this blogpost, since scientific papers can be really difficult to read. So that whenever I mention deforestation in another blogpost, you can refer to this post to read once again what is so devastating about it. Useful right? At least, I figured so.

There are several types of forests, but the tropical forests suffer the highest deforestation. The Amazon (as we’ve all seen on the news lately), The Congo Basin and and the Sumatra forests for instance. We see the most deforestation in developing countries, which means that they are not as wealthy as us (the western world). Because they are poor, they are willing to cut down forests. They need money to escape poverty. It’s not such a weird idea. Europe used to consist of a lot of forest area too, but we’ve cut most of it down the last couple of decades. In 1960, about 32% of the earth were forests, today we have about 30% (The World Bank, 2019). Now, that might not seem like a lot. But these numbers are about all forests on earth, not only tropical forests which we see in the news so often. The bottom line is that the total number is going down in a relatively short time. In some regions of the world there is a growth in forest area, but the total number goes down. 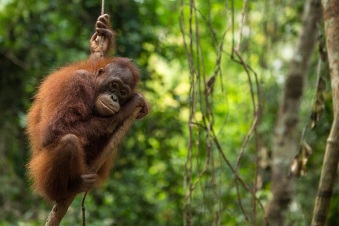 A four year-old female orangutan Malia hanging on a tree at Borneo Orangutan Survival (BOS) Foundation in Nyaru Menteng, Central Kalimantan. Malia was confiscated from a resident on June 20, 2016 in Palangka Raya, Central Kalimantan after the owner kept her for three years.

These arguments are all proven. But a lot is still uncovered. There might be even more devastating effects (if that’s even possible). We already know it’s this bad, so why continue? That’s a difficult matter. I know we can’t solve this problem easily. But this blogpost was just to show what we are talking about when we talk about deforestation. It’s devastating, isn’t it?

Today I’ve used some scientific sources in my blogpost. If you want to read more, here’re the references:

2 thoughts on “Deforestation – What is so bad about it?”