I focus on being positive on this blog. I share mostly positive accomplishments and positive news. I want to stay positive, we can heal this world so to say. Yet, there is need to be critical. Of myself, but also of initiatives sometimes. This is necessary to keep this blog critical, but also honest. And that’s why I am posting a rather negative post here today. I have decided to sell my Fairphone and I bought a refurbished Iphone X.

Why I bought a Fairphone 2 in the first place

Back in February last year I bought a Fairphone 2. I thought very long about buying a new phone back then, since buying new is the least sustainable choice. However, back then I really wanted to support Fairphone because I feel like the electronics industry needs to change. There’s still a lot of slavery involved in the electronics industry (one article about this can be found here). I felt like I needed to show people that there is an alternative, literally show them while using my phone. A phone is a very visible accessory and so I wanted to advocate for Fairphone. That’s why I made the choice to buy new: to create awareness.

But there was another reason why I decided to make this call. The phone is modular. This means that whenever a part of it breaks, you can replace it easily yourself. In other phones it’s usually so that you have to get rid of the entire phone when a part of it breaks, which creates a lot of waste. And so, I bought this phone thinking I bought have this for life. Yes, this was a commitment to me.

My experience with the Fairphone 2

At first, I was really exited. My previous phone was an Iphone 4 and so this was an improvement. I wrote a full blogpost about the Fairphone 2 back then. I was a bit surprised by the charging time and the camera quality back then. But I took it for granted, a startup can’t be perfect. Yet, over time it began to bother me more and more. As an active Instagrammer, Youtuber and blogger I just need a good camera. I started comparing the camera from the Fairphone with the new Iphones and I felt dissapointed. I can’t make video’s properly either. The quality started to annoy me more and more. The Google search is veeeery slow, I need to charge it a lot, when I call someone they can barely hear me and the list goes on. I want to support a good company, but I don’t want to be disappointed every single day. I started to get at a point where the phone ruined my day sometimes. And so, I was done. An eco-positive lifestyle has been so much fun so far and I want to keep it that way.

I sort of made the call to sell my Fairphone 2 about a month ago. But then something else happened which made me even more disappointed. They launched a Fairphone 3. And this I don’t support, at all. They claim to have a modular phone, then why bring new models to the market? This is the exact same as Iphone, which I find disgusting. They bring out new models every once in a while, so you get rid of the old model. Yes, you can send your Fairphone back and they’ll recycle it. But still, the base of the company is ruined in my opinion. This is not what I signed up for. It’s okay that you’d want to improve your phone, but then improve your parts, not the entire phone. You can still  order spare parts from the Fairphone 1 and 2, but still. I don’t agree with this strategy at all. Now that I think about this I could have known it, since I bought the Fairphone 2 and there was a Fairphone 1 at the time. I just didn’t think of it that way.

So, all in all, the quality of the product was low and the company didn’t have my values anymore. That really sucks, since I loved the idea in the first place. But it also sucks because there is no alternative yet. When I have to believe the Greenpeace report about sustainable electronics, the number two on the list is Apple. For me this is not relevant anymore, since I don’t want to buy new any longer. At the time, I made an exception for the Fairphone, but usually I don’t make exceptions. Secondhand (or in this case refurbished) is the most sustainable option, always. And so I am back to that. 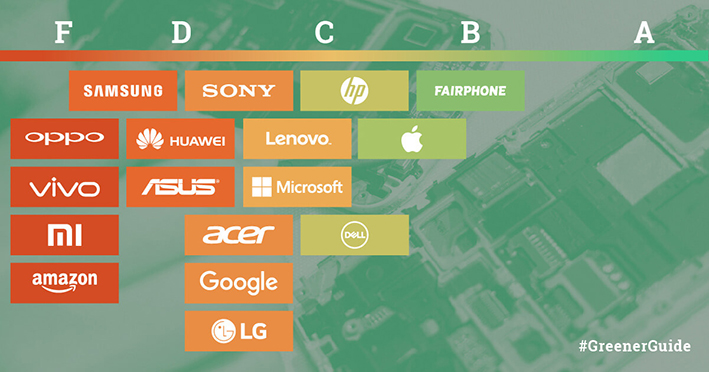 The refurbished Iphone I bought

Since I had been thinking of buying another phone I had asked around for good phones. I was really impressed by the Iphone X, mostly by the battery and the camera. Oh lord, this phone makes a-ma-zing pictures! So, a few days ago I ordered an Iphone X. But not a new one! This one is refurbished, so it’s basically secondhand. Someone’s phone broke and they fixed it and now it’s mine. For me, that’s what circularity is all about. Fixing what you have. I decided to go for the Iphone X since it is one of the latest models and so I hope it will last a long time. However, Apple is smart and at one point won’t support the software any longer. So, for now this is the best solution in my opinion but it still doesn’t solve the discard problem we have with electronics.

What do you think about my choice? And what choices do you make when buying a phone?