This post is a follow-up from the post from last week. I’ve made the decision to ditch the plane because it’s not sustainable at all. Last week I shared the outward journey by train from Haarlem to Albufeira. Overall conclusion: easier than expected. This week I’ll share my return. I went from our apartment in Albufeira to Weesp in The Netherlands. So, how did that go?

Flying is killing us

Yes, I have shared it last week too. I don’t fly because it is bad for our environment. But I want to highlight it again. Flying is killing us. Our mother earth is in crises. Coral is dying, plankton is dying, the Amazon is burning, heatwaves everywhere. So, before I want to share my experiences with train-travel, I want you to know. Flying is killing us. Because the planet is going to survive after all, but will we?

Quick side note: I didn’t take many photos on the return so the photos are basically the same as last week. I am sorry!

I mentioned it in my previous post about this adventure, but my friends didn’t join me. They chose to fly. And as disappointed, terrified and sad that makes me, it is what it is. But due to this I had two extra days of holiday. They came in Albufeira late at night and left early in the morning. 6:00 to be exact. I was up at that time as well. I tried to sleep some more but that was really hard. I took a few short naps until 9 am. Then I prepared myself and the apartment so that I could leave. At 11 am I had to leave the apartment and my train left at 4:30 pm so I had a lot of time. I decided to get some all you can eat lunch, sushi. This way I was full for the journey. So I sat in the lobby until 12:00  and then I went out for lunch. At 2 pm I took the bus to the train station. I was at the train station at about 2:30 pm and so I waited there for two hours. Knowing that now I would’ve gone home a day earlier than my friends. Being alone the last day of a holiday isn’t that much fun. I couldn’t be in the apartment anymore and I basically just had to wait for my train. If I had left the day before I’d be on my way at night and they’d be going after me the next morning. That would have been better and I know that now. Lessons for next time! 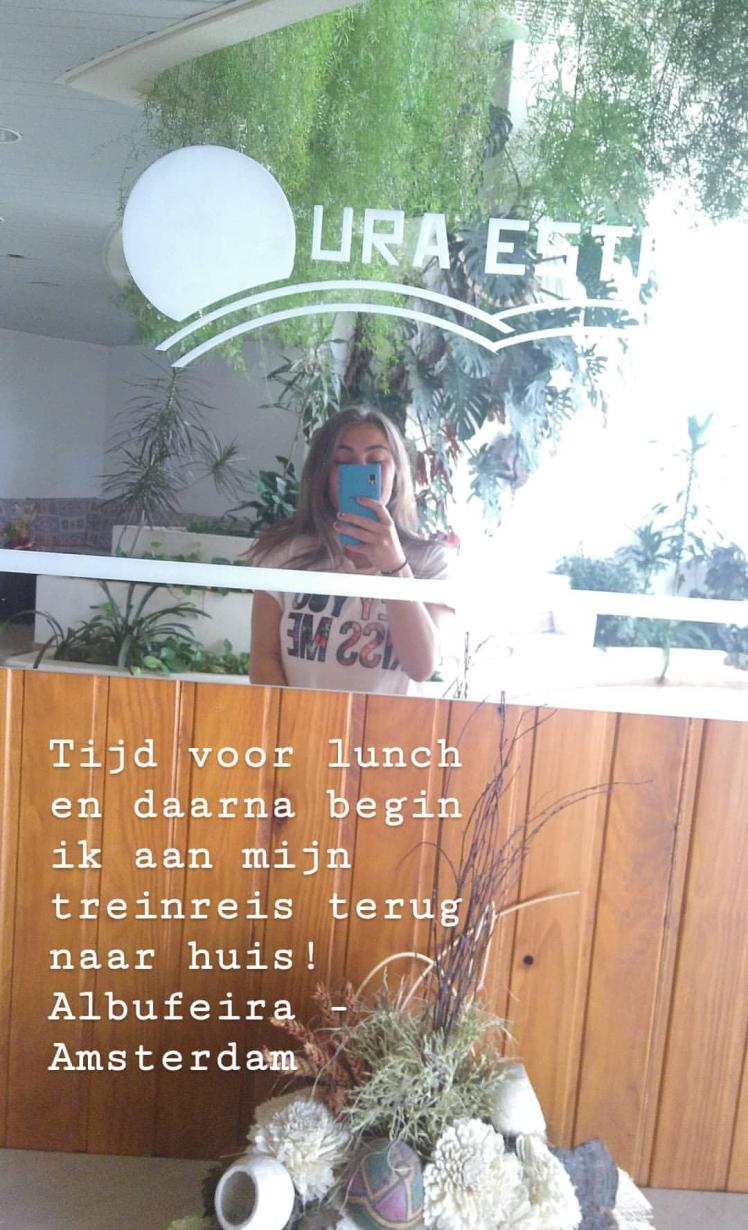 At 4:30 pm I went Lisbon and that was a good train. I sat in it for 2,5 hours. It had electricity, a good clean bathroom and a lot of room. This part is not that special as I had said before, the view is very arid. At 7 pm I arrived in Lisbon which was very early. My next train was leaving at 9:30 pm and so I waited for 2,5 hours. I did this intentionally because when I booked the tickets I didn’t know much about the transit. Knowing this now I could have booked a train later from Albufeira. Now I had dinner had at the station of Lisbon. I had prepared the food a day before and so I didn’t buy anything. Saving money and waste! The waiting room is Lisbon was fine, it has electricity so I could charge my phone.

At 9:30 I got the night train. On the outward journey I did this almost last, but now I sort of started with the night train. I preferred the outward journey because then after you’ve slept you almost arrive at your destination. This time I decided to sleep at 11 pm, which made me miss the sights. But it’s dark anyway, so that’s okay. However, this is the prettiest part of the journey. That sucks but since it’s a night train and that will never change. I slept from 11 pm till 11 am! I slept very good, even though it’s a train. I did wake up sometimes, because we stopped or I had to go to the bathroom. But that’s fine! At 12 pm we arrived in Hendaye (the border France). There I had to wait from two hours again, but there was nothing I could’ve changed there. I could have gotten a TGV earlier I think, but that would mean a transit of 30 minutes and that’s scary to me. A delay and you’re screwed. So I prefer waiting a little longer and everything going smoothly. It’s just some extra me-time haha. This journey I read the same book as the outward journey, made some puzzles and I watched some Netflix. 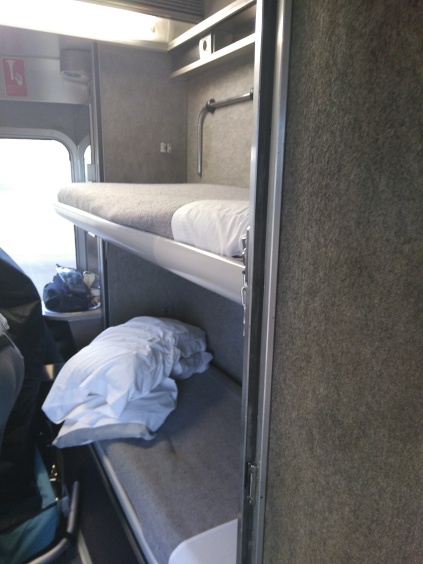 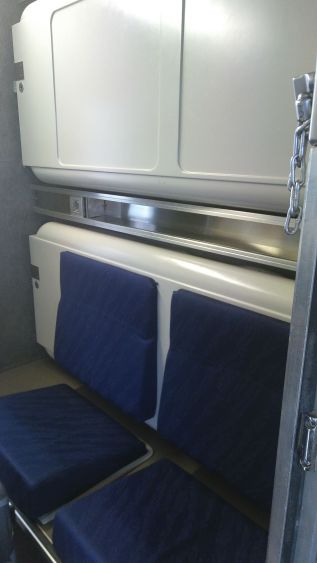 And there we were in the TGV again. Going about 320 km/h! In 5,5 hours I went from Hendaye to Paris. So quick! The view is not that great on this journey, again very arid. But maybe that’s just due to the time of the year. I don’t know. But the TGV is very comfortabel. Much room, electricity and a very clean bathroom. I still can’t believe you can cross the country of France so quick! At 18:30 pm I was in Paris Montparnasse. This was the most tricky part of the journey. I only had 60 minutes to transit to Paris Gare Du Nord. I didn’t want that, but the train I was taking was the last one. Which put some extra pressure on me, I didn’t want to be stuck in Paris. When I arrived in Paris Montparnasse it was soooo busy! That scared me a little but I knew where to go. I had done this before. A tip from me: while still in the train walk as far to the front as you can. This saves you time at the station because the TGV is very long. I was placed all the way in the back and so from out the train to the station took me about 5/10 minutes already. Once there I knew the way and so I bought a quick ticket for Metro 4 and walked as quick as I could with all the people there. I took the Metro which takes about 20 minutes and arrived in Paris Gare Du Nord (the main station). Once there I was a little confused because it’s so massive. There are local train for within Paris but I needed the international train to Amsterdam. I took a breath and stopped for a moment. I saw the screens and saw the track I was supposed to be at. Pfew! 10 minutes left and I was in the Thalys. I must say, it is definitely possible in 50/60 minutes, but I don’t prefer it. It gives a little stress and you don’t want that while traveling. 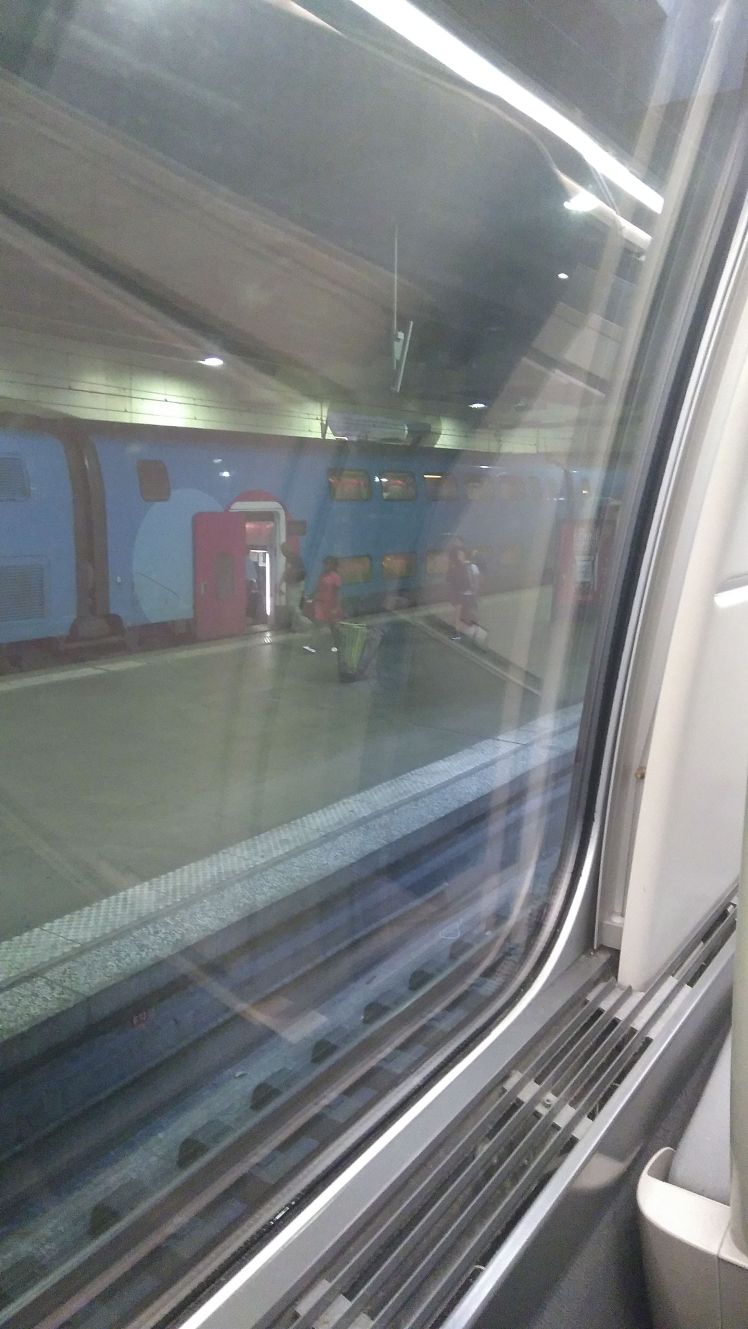 Ah, the last train! This feels good because now at least I was going to make it to The Netherlands. Everything in the Thalys went very smoothly and I was at Schiphol Airport in 3,5 hours (how ironical?). The Thalys is a good train as well! Electricity, much room and a reserved place. It felt good to pass the border and be back in The Netherlands. I really wanted to see my family again. 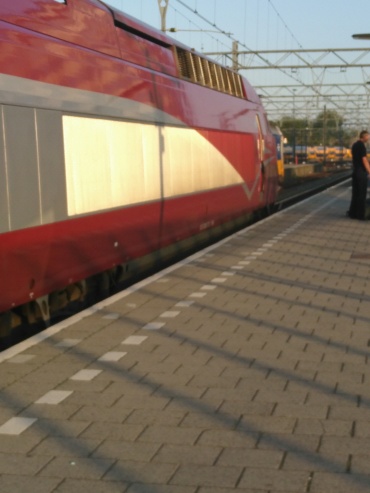 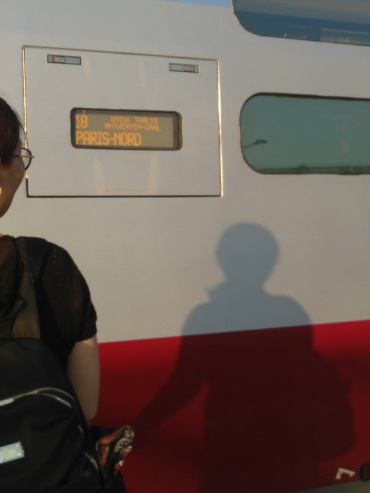 It was almost 11 pm when I arrived at Schiphol. I quick hopped onto a local train to Weesp. At 11 pm I was in Weesp. There my boyfriend picked me up by car and we drove for about 30 minutes to his house.

A few days later I took another train to my hometown Enschede, since I wanted to spend a few days with my boyfriend. Once back in Enschede I’ve completed this whole adventure. It’s been a journey! Everyone around me knows it: I am not traveling by plane again. This train trip was so good to me! I will continue to go on holidays, just not by airplane anymore. The planning for next year is to go inter-railing and also go to Sziget again (both by train, duh)!

How do you make it to your holiday destination?

3 thoughts on “Traveling to Albufeira by train: the return”